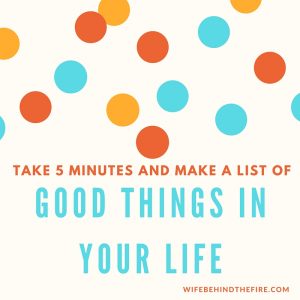 A week ago I posted how I felt overwhelmed with all the negative in the world. I came up with a quick list of ways I could combat that. One of the ways was to create a blog post with a list of all the great things going on in my life right now.

I'm sure I could come up with more, BUT I'm sure you've read enough.

Last week when I was really getting down over all the negative, I did reach out to my support system. See, I talk to a lot of wives behind the scenes and at times, it gets to be overwhelming. Most people aren't reaching out when they are at high points in their lives. I LOVE being a shoulder to cry on or an ear to bounce things with. But it had taken a toll.

Just as I had created this post and then told my support system of wives I was at a breaking point, I got 2 messages. One from a firewife that found out her biopsy was benign and the other from a wife that had taken a giant leap and went to counseling with her ff. Getting those 2 messages was enough to perk me back up again. But I'm still going to work through the list I made last week. It's always good to balance.

Have you created a list lately of all the positives going on in your life? Write them below in a comment. Let's share the good stuff!