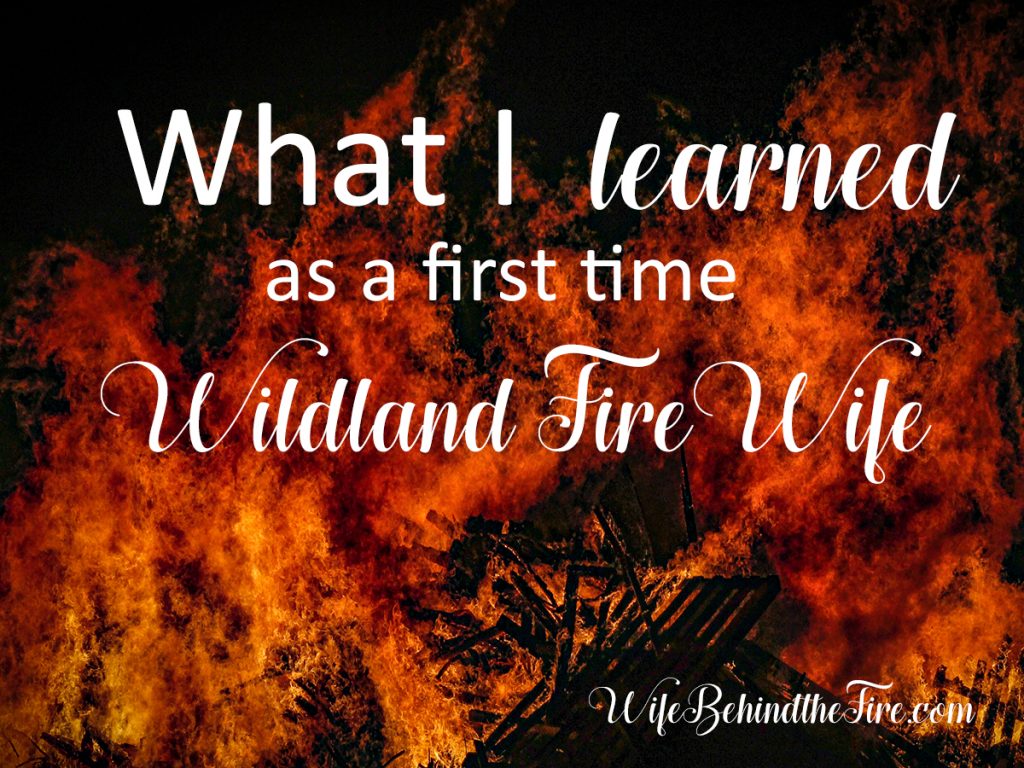 It's hard to believe that another fire season is nearly upon us.  For some, last year's season had a very late ending.  For some, it never truly ended.  After being a structural firefighter for 17 years, my husband Phil was hired by our local Department of Natural Resources as a wild land firefighter 3 years ago.  Last year he went on his first out-of-state assignment.  I was as prepared as I could be, especially for someone who really didn't know what to expect.

I work full time as a 911 dispatcher on 12-hour night shifts.  I am very fortunate to live relatively close to my parents, both of which are retired.  They are a huge help with my kids when my husband is on fire calls and were such a blessing during his out-of-state assignment, which lasted 2 1/2 weeks.  Without them, I don't know what I would have done.  As prepared as I was for childcare, there were several things that I didn't think of until the assignment happened.

I knew going into Phil's assignment that I should be prepared to not communicate with him.  After all, he was going to Montana, which has very spotty (at best) cell phone coverage.  I was pleasantly surprised to hear from him a couple of times when he borrowed his supervisor's phone, which had minimal coverage.  Still, it was wonderful to hear his voice.  What I didn't expect was having little to no information.  I constantly wondered where he was and what he was doing that day.  Then the deeper questions crept into my mind, like “Who do I call if an emergency happens at home??  How do I get word to my husband?”  As a dispatcher, I am fortunate because I have direct numbers to a couple of Phil's immediate supervisors at my dispatch center.  But what if I were a regular fire wife?  Who would I call?  The situation taught me that I need to get answers to some of these questions before his next big assignment.  Obviously, I will be limited as to what I can know when it comes to location and duties, but I guess a general location is better than nothing.

The timing of Phil's assignment couldn't have been worse in my opinion.  We had so much happening in the 2 1/2 weeks that he was gone and only having a few hours notice before he had to leave, we didn't have a lot of time for preparation.  For starters, our 11 year old son Alex was about to start middle school and I was already worried about his transition.  I had great communication with some of his teachers and explained what was going on with our household dynamic and asked them to sort of keep an eye on Alex to make sure he was adjusting okay.  I found myself constantly checking in with him, asking how school was and how he was feeling about things.  He of course missed his dad, but school turned out to be a great distraction.

Phil also missed Alex's birthday party.  He was on the first leg of his trip home during the party, so I had two very excited children and several happy family members and friends when Phil was able to make a call during the festivities.  I am so thankful that we have a son who understands what it is to have a dad who is a firefighter; a dad that can and will leave at the drop of a tone to help someone.  For someone who just turned 11, he shows so much maturity and has a great head on his shoulders.  I was so sad for him that Phil missed his party, but he was okay.  He knew that his dad was helping people, that he was doing something new and exciting.  Most importantly, he knew that there were so many people there to support and love him.  Grandparents, aunts & uncles, cousins and friends, both civilian and fire.

One of the most stressful aspects of Phil's absence for me was the fact that our yearly family vacation was just days away.  We go to the annual Firemen's Memorial Festival in our state and camp with a great group of friends.  Usually, Phil leaves on Tuesday to get our campsite set up and have some time to fish or do whatever he would like.  Wednesday afternoon, I head up to camp with the kids so Alex only misses two days of school.  When Phil left, he told me it would be an 18 day assignment.  We really didn't know if travel time was included in that number (it was a 2-day drive to and from Montana) or if he would be asked or required to stay longer due to the amount of fires out west.  That meant that on top of the regular stresses of life, I also had to learn how to hook our camper to my husband's truck, haul it for my first time and set it up by myself for my first time, on top of packing, shopping for a week's worth of food, etc.  I was thanking God when Phil made it back home at 11pm on Monday night!

As I said before, my parents helped watch the kids during my work days.  I would leave work at 5:30am, pick Alex up from their house, take him to school by 7am, make the 10 minute drive home and sleep until I had to pick him up at 2:30, drive him the 30 minutes back to my parent's house, then make my 30 minute commute to work.  It was exhausting, to say the least.  When I was home though, is when it really hit me.  The loneliness.  The quiet.  The silence in my house was deafening.  Whether Phil is home or the kids are home, there is always some noise, some buzz throughout our home.

Suddenly, there was just nothing.  I found myself talking out loud while getting ready, just to have some sort of noise.  I wasn't crazy (I don't think!), but I just needed something to combat the emptiness.  Aside from our quiet home, I realized just how much I missed my husband.  He wasn't there for me to say “Oh my goodness, you'll never believe the call I took at work last night,” or “Don't forget, we have that appointment in two days,” or “Guess what cute thing Abby did today!”  I truly didn't realize how much I share with my husband until I couldn't talk to him.  My experience also made me pay special attention to our kids and how they were feeling about not being able to talk to dad.

Beyond all of the stress, the lonely times and the missed experiences, we had a successful out-of-state assignment.  Phil loved it and learned a lot.  The kids and I got to spend some great quality time together and we didn't burn the house down.  🙂  I feel like I'm a little more prepared for the future and I hope I've given other Wildland Firefighter Wives, especially those new to to this, a few things to consider.  I hope that all of your husband have a safe and successful fire season!

I am a 911 dispatcher, a mother of two and of course, a firefighter's wife! My husband and I have been married since 2004. He has been a firefighter since 1998, so it took time to get used to living the "fire life," and I still have issues with him leaving at the drop of a tone every now and then. In 2015, he was hired with the Department of Natural Resources as a Wild Land Firefighter, which has brought challenges to our family dynamic and new excitement as well. I began working as a 911 dispatcher 15 years ago and love my career! Most of my spare time is spent taking care of our son (11 years old) and daughter (4 years old). I enjoy doing crafty things, camping and writing in my blog "Nine Mom Mom" where I like to focus on child safety issues. In 2007, I was diagnosed with severe Rheumatoid Arthritis. It is a disease that I struggle with daily and one that has taught me to take care of myself so that I can continue to take care of my family.