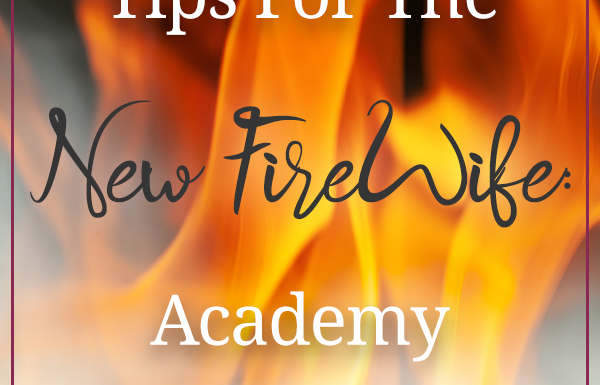 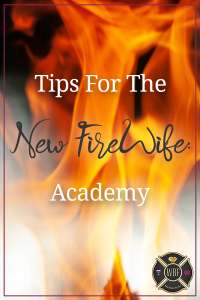 When my Husband and I met I knew being a Firefighter was his dream job. Like any girl I found this to be extremely attractive. The hiring process where we are from is extreme difficult and long. You go through a written exam, a physical test, and if you pass those you will continue to the hiring process which involves a panel interview and a chief interview. When my FF was going through all of this I was pregnant, and we were newlyweds. It is a six-month process, so we knew we wouldn't find out if he was hired until after our baby had arrived.

The day came, and we didn't hear anything. Which is a good thing because it means you were made an alternate. We did not think that he would be on this class, so we had high hopes for the next hiring process, but he got a call two weeks later. He needed to go and be fitted for gear and do a stress test with a doctor. Five days later he was starting at the academy and our life was flipped in a totally new direction.

After the first week it started to set in that this would be our life for the next 22 weeks. I would like to just share some tips and tricks that I have learned throughout this process as we are nearly graduation day.

The first thing I learned was that your FF is going to be basically dead when they return home on most days especially at the beginning of the academy. As much as an adjustment it is to us, it is even more so of an adjustment to them. They are being tested mentally and physically in a way that I can not even imagine. This was so incredibly hard on me because I was a new mom who had just started back to online college classes, and couldn't help but to feel frustrated with the fact that suddenly I had no help. Now I am not one to just take something like that laying down so on days that he came home, and they had just done classwork, he was in charge of the baby and dinner. On the days that he came home dead tired, dripping sweat I took charge and handled the house work.

Another thing is you're going to have to learn a little about the fire service as well. FF would come home, and I thought he was speaking a different language at some points. As soon as I started helping him study for tests and quizzes after the baby had gone to bed I started to learn some as well and it was a chance for us to bond and feel connected when at times you feel separated and like there's another life going on in your FF's life that you have no clue about.

My husband's class was a little different in the fact that they are 32 of them. They are all incredible men and women, but there is a swift divide right in the middle of them. Half go out every weekend and drink nonstop and message their group message all weekend blowing up all 32 cadets’ phones whereas the other half are at home with their families on the weekend. We had a family day this past weekend and got to see the cadets go through different drills and see what they do on a day to day basis. It was incredibly awkward because some of the wives were huddled up together and talking like they've know each other for years and the other half of us had never even heard of each other. The wife next to me was embarrassed because she felt left out and kind of chewed her FF out for it.

It is important to remember that you don’t have to be apart of the “IT” group of wives. You are doing the best job you can in your life. You are raising tiny humans. You are working. You are a wife, a daughter, a sister, a girlfriend, a mother. You are so much more than trying to fit in with those FireWives that are trying to be the “IT” crowd. You are adjusting to your new life. You are making a home that your loved one can come to after that bad call.

You are being the best you can be and that is all that matters.

The number one thing to keep in mind is that none of the new FireWives have any clue what we are doing. We are making it up as we go. The girls that go out with their cadets, that’s how they're doing their best. Those of us that stay home with our cadets, that is us doing our best. Don't feel any pressure to be anymore than you are. You know what works for your family. You are doing a great job.

Hello, I`m a new Fire Wife and new Mom. I`ve been married to my FF for 2 years and have a wonderful six month old baby girl. I`m currently attending school to become an Elementary School Teacher. I have a slight obsession with dogs and watching Netflix movies.